Movies That Fell Through the Cracks # 54 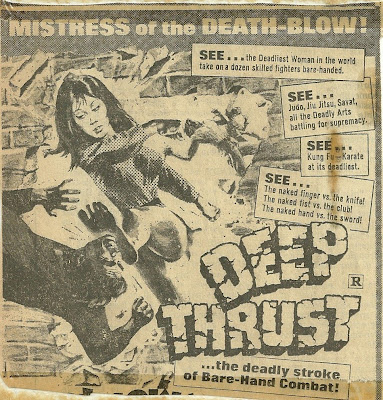 Okay, so it's 1973 and Bruce lee has died just as the Kung-Fu movie craze was building nicely. You're an enterprising film distributor, though, and realize that Bruce was not the only actor in Hong Kong making martial arts films. You write a check for a handful of Chinese action films that includes TIE ZHANG XUAN FENG TUI which stars a bunch of actors no one in the USA has ever heard of including Angela Mao-Ying and Sammo Hung. How to market it...Hmmmm...THAT'S IT! Everybody in America has been hearing about the controversial DEEP THROAT for more than a year now. Let's call this one--for no apparent reason--DEEP THRUST! It sounds vaguely dirty and people who aren't paying that much attention will probably think that THIS is the picture everyone is talking about and flock to see it! Make sure there's lots of thigh in the poster artwork and don't forget to throw in the words "bare"and "naked" a few times in the ad text!

While that's probably close to what actually happened, few moviegoers outside of those of us who were seeing every single martial arts film that came down the pike in '73 actually went to see this one. Plotwise, it was a very typical revenge oriented "chop-socky" flick, interchangeable with about a dozen others on release at the same time. It was later re-released under the title LADY WHIRLWIND in an effort to get those who DID see it to see it again. We probably did. It's so much like so many others who could tell?
Posted by Booksteve at 10:41 AM