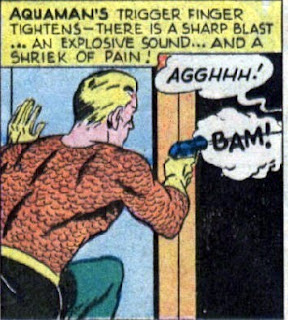 Traditionally comic book heroes--DC comic book heroes in particular perhaps--have avoided the use of guns...or so says the myth. Here are a couple of panels from 1940's comics, however, showing Aquaman and Hawkman using guns on the 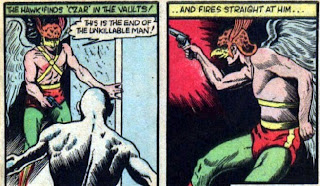 bad guys. Not ray guns or zap guns or alien-intensified ether weapons just old-fashioned bang-bang, you're dead type guns. Just looks odd. (Not only that but I think Hawkman needs glasses under that helmet if that's his idea of firing "straight at him.")
Posted by Booksteve at 4:47 PM