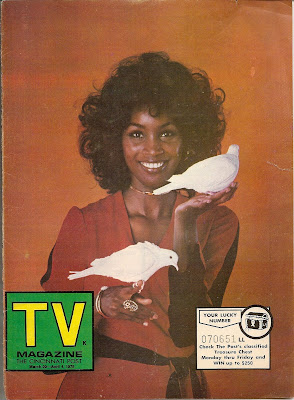 Although largely forgotten today, Teresa Graves was a television pioneer as the first black actress to topline an hour-long TV drama. In this case, the show was GET CHRISTIE LOVE, a short-lived cop series which brought us the minor catchphrase, "You're under arrest...Sugar!"

She had begun her career as a singer with the sixties ensemble the Doodletown pipers and moved into comedy at the end of the decade. She actually appeared in the legendary cancelled in one episode TURN-ON before moving on to the show it aped, ROWAN AND MARTIN'S LAUGH-IN.

There wasn't a lot of call for sexy, funny black women on TV in those days so she eventually moved into blaxplotation films such as BLACK EYE and THAT MAN BOLT, both milder examples of the genre with Fred Williamson. She had the title role in the dreadful UK horror spoof VAMPIRA (although the US release title was changed to OLD DRACULA) opposite Hollywood legend David Niven. The only problem was that her character was pretty much the mcguffin and only appeared briefly.

Then she made the TV movie, GET CHRISTIE LOVE. It was a hipper than hip supercop flick and, like many TV movies, doubled as a pilot. It was quickly picked up and the series was begun. It was a fun, popular show but it only ran one season. According to a 2002 TV GUIDE piece, here's why: Executive producer David Wolper remembers that Graves came to his office and gave him a list of what she would no longer do as Love, including knock off bad guys or sexually entice men. "She was a' superhip policewoman. But you can't shoot anyone, kill anyone. Can't have relationships with anybody, any violence. You can't do a police show based on that." Producers tried to accommodate her, but the series was dropped after one season.
After that, Ms. Graves devoted her whole life to her role as a Jehovah's Witness and retired from show business, apparently never looking back. She died in obscurity in a 2002 fire. In 1974, however, Teresa Graves was breaking down color barriers once a week in our living rooms...Sugar!
Posted by Booksteve at 7:52 AM