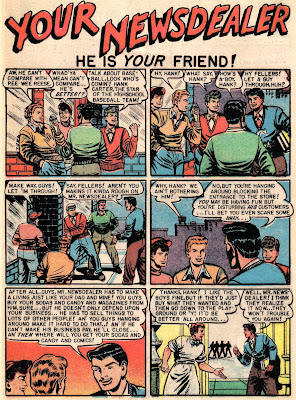 Here's a one page PSA-style strip from a 1949 pre-trend issue of EC's GUNFIGHTER. Although this page is left out of the GCD's index, I'm going to guess it's Feldstein art. The traditional EC Leroy mechanical lettering adds to that presumption (although note the double mis-use of "hy.") Apparently this was a fairly soft approach toward an anti-juvenile delinquincy message--rather odd when you consider it coming from the company at whose doorstep the whole problem would later be dropped by some.
Posted by Booksteve at 1:46 AM