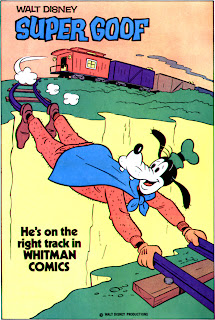 I didn't read Disney Comics as a child and I now know that this was my loss. The one exception I made to this was that I DID sometimes end up with a copy of SUPER GOOF. SUPER GOOF, of course, ws not just a Disney comic but a super-hero Disney comic! That made all the difference to me. In the past year alone, I've picked up some SUPER GOOF comics, found in dollar bins at the local comic book shop.
Basically, Super Goof is Goofy but he has these power peanuts he keeps under his hat. When he eats them and strips down to his red long-johns he is, for all intents and purposes, Superdog! The stories are fun in the way PUREHEART THE POWERFUL is fun but they're played a little more straightforward.
At the same time, though, this IS still Goofy we're talki 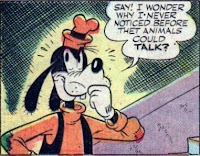 ng about so he still bumbles his way through most adventures with his cornpone optimism. If you've never read SUPER GOOF, check the dollar bins in YOUR comic shops! Starting there, you too might go on to discover the wonders of Carl Barks, Don Rosa, Paul Murray and Floyd Gottfredson!
Posted by Booksteve at 12:03 PM