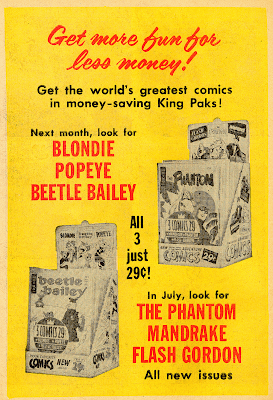 We wrote here the other day of King Comics and how they offered (with the notable exception of the SECRET AGENT X-9 strip we reprinted) some of the best art to be found in comics of the 1960's. What did them in so quickly may well have been their own innovative distribution system, as seen in this ad.

King Features Syndicate had controlled the rights to many of the big name comic strips for years and often licensed them to various companies. Dell, Harvey and Gold Key had each published their own FLASH GORDON comics for example when King decided to start their own line and keep all the profits in-house. King would offer FLASH GORDON, THE PHANTOM, MANDRAKE THE MAGICIAN, POPEYE, BLONDIE and BEETLE BAILEY. But there was a catch. While one could subscribe to individual King titles, their preferred method of distribution was in King Paks!

Comic Packs had been tried by the big publishers before and would be tried again and again right up to recent times but they never completely work. The goal seems to be to get the merchandise into venues where one might not normally see it--toy stores, department stores, etc. Thus, in theory at least, one is marketing to a different audience than that which might have eagerly picked up the product on newsstands or at drugstores, dime stores and the like.

King would offer its 3 hero comics in a pack and its 3 humor comics in a pack, each update every month. This method led to many early collectors scrambling to find copies and also to some of the packs being found in stores years after King had actually given up on making their own comics!

As seen in this house ad, each pack was only 29 cents, thus saving the purchaser 7 cents off the individual purchase price at 12 cents each! What a bargain...if one could ever find them!
Posted by Booksteve at 1:49 PM