The Human Torch For Hostess 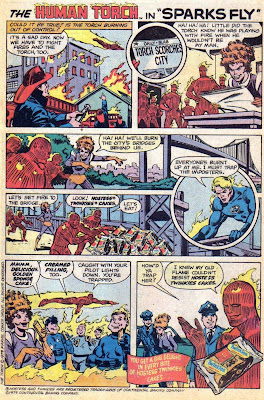 I'm sure that everyone reading my blog is familiar with the ubiquitous late seventies Hostess ad campaign that ran in comics of all sorts. For a time we had everybody from Richie Rich to Archie to Wonder Woman to Captain America plugging Twinkies and their tasty ilk. We wrote here before about one or two of the more obscure ones as well as about First Comics' early eighties parodies of the campaign featuring BUCK GODOT, OMAHA THE CAT DANCER and other independent creations. There's even a site that purports to have them all posted! Here, today, I present one that really isn't all that special except that somehow when I ran across it today I didn't remember it at all. The Human Torch has apparently spurned the romantic interests of this nameless but evil young woman and now her ersatz Torches attempt to gain revenge by literally burning down the town! Art appears to be by the unusual team of Sal Buscema and Klaus Janson...or is it Pablo Marcos? Either way, it has a weird feel to it all around. Enjoy! And have a Twinkie!
Posted by Booksteve at 3:52 PM