New I Love A Mystery 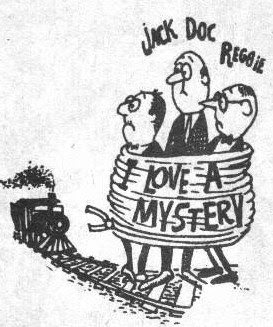 I first discovered Carlton E. Morse's I LOVE A MYSTERY with the fairly disastrous late sixties TV pilot that didn't even air for several years! David Hartman starred and Don Knotts had a cameo at the end. A few years later I heard Tony Randall, who had starred in a later series of ILAM, regaling a TV talk show host with anecdotes from the series. When I finally found a source for old-time radio broadcasts other than the standard Radiola record albums, some of the very first items I bought were whole serials of I LOVE A MYSTERY and ADVENTURES BY MORSE. Ever since, I've been a big fan of the adventures of Jack, Doc and Reggie (and in the case of the latter program, Captain Friday).

Now comes news from author and historian Martin Grams, he of the Mid-Atlantic Nostalgia Convention, that I LOVE A MYSTERY will be staging a tentative comeback! Here's what Martin had to say:
I Love A Mystery is making a comeback! It's official now. Tim Knofler and a
number of talented performers will be recreating all of the I LOVE A MYSTERY
radio serials, to be released commercially on CD. Authorized through the
Carlton E. Morse estate, each serial will be complete, uncut and unedited.
The original Hollywood run of scripts will be used to recreate every word,
every sound effect and music cue.

Tim acknowledged (to my delight) that they will not be censored which means
when you hear "The Widow with the Amputation" and Jack and Doc are stranded
on the island defending the old lady by knifing enemy soldiers (yep, World
War II propaganda), there will be no censorship regarding the slang that was
prominent in the serial.

The official web-site will be www.newiloveamystery.com and while it's not up
yet, you can bookmark it for a return visit. One site you can check out in
the meantime is http://www.audiocei.com

Under contract, the very first serial commercially soon-to-be released will
be a "make it or break it" proposition. If the first release sells beyond
expectations, they will be granted permission to reproduce ALL of them. And
this is the only stipulation so when it becomes available, buy one for your
friend and for yourself.
Posted by Booksteve at 6:14 PM