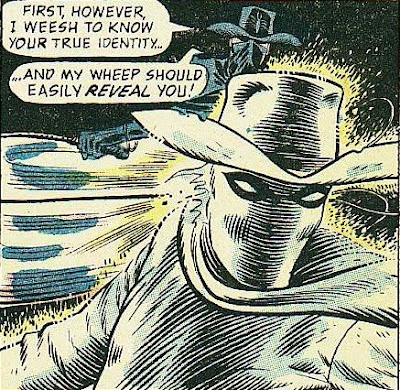 We wrote recently here of the TWO-GUN KID's super villians including Tarantula and Hurricane. I pointed out that TWO-GUN KID was generally the only western comic I ever paid much attention to but I somehow forgot my love of THE GHOST RIDER! Something else I had forgotten was that both of the aforementioned evil characters returned later on in the revived GHOST RIDER strip that appeared in WESTERN GUNFIGHTERS starting in 1970.

The early issues of this updated WESTERN GUNFIGHTERS run were, in fact, a real treat. The title was a grab-bag of experimental new features, well chosen reprints and, as mentioned, a direct continuation of the cancelled fan-favorite GHOST RIDER series.

Dick Ayers, arguably the best of the long-running cowboy artists, returned to the art as he had done for the Marvel title as well as its original 1950's non-Marvel version. With Gary Friedrich back on scripting and inks from relative newcomer Tom Sutton, this series played more like a continuing serial even going so far as to have an ending, after which the strip was dropped yet again. 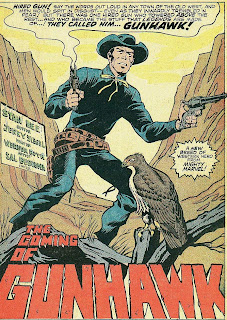 The main attraction in issue # 1, though, was GUNHAWK, a creation of Superman's papa Jerry Siegel in one of his rare Marvel outings. Almost a JONAH HEX lite, this scarred cowboy hero claimed art by Werner Roth and Sal Buscema. This splash, however, sure looks like it's by Herb Trimpe to me. There's also some obvious Romita touches in the story and, surprisingly, a number of faces that remind me of Jack (FIRST KINGDOM) Katz!

Tom Sutton turns up on full art chores for the first appearance of THE RENEGADES. Sutton seems to be in full-on Kurtzman mode here for some fun, loose art and uniquely rendered characters. Golden Age vet Syd Shores, most recently inking Kirby's CAPTAIN AMERICA at that point,

offers up some tightly rendered pencils and inks of is own on TALES OF FORT RANGO, a Gary Friedrich script that plays like a TV western.

In fact, all of the new strips in WESTERN GUNFIGHTERS # 1 read like "pilots" and a few did return in later issues. Eventually, though, WESTERN GUNFIGHTERS settled in as a strictly reprint title mixing sixties features like KID COLT, OUTLAW with Atlas reprints from the fifties. But YEEE-HAH! It shore wuz FUN while it lasted!
Posted by Booksteve at 4:33 PM