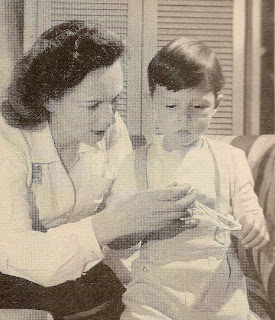 Big Beatles fan are ya? Me, too. Somehow, though, I never expected to see this young lad in a WWII era LIFE magazine spread. Seems there was something special about him I never knew. He is NOT one of the Beatles but, in spite of an impressive list of accomplishments on his own, his name will be forever associated with the Beatles...and the Rolling Stones for that matter. Who is he? You tell me. The only clue you need--if you happen to know what I DIDN'T know--is in this very picture! What's that? You want more clues? Well...the caption (which will be replaced in a later post) indicates that the cute l'il fella wants to be either a gardener or a fireman when he grows up. Let's just say he apparently changed his mind along the way and let it be at that.
Posted by Booksteve at 12:53 PM