Belated Birthday Wishes For My Father 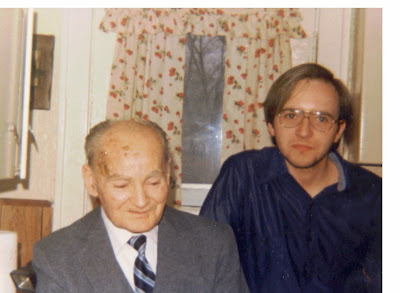 Yesterday would've been my father's 99th birthday. Now there's a sobering thought. I got a lot of my pop culture love and knowledge from him. Born in 1910, he saw a lot of changes in his lifetime and I have no doubt that the changes we've seen just since his passing in 1991 would've both shocked and delighted him. When he died, we didn't have a computer, there were no cell phones, no DVDs. He was, in later years a TV junkie. He would not have believed how many channels we have today...with still little worth watching. He loved video games, particularly ASTEROIDS and SPACE INVADERS and an old ATARI game called CHICKEN. He loved B-Westerns and used to sit with me twice a week in the 1970's watching George O'Brien and Tim Holt outwit the bad guys on TV. He took me to see DEATH WISH, DIRTY HARRY and even SHAFT in the seventies, too! He liked superhero comics, particularly THE LEGION OF SUPERHEROES and, as he called them, THE FRENETIC FOUR. He really loved DICK TRACY, though, and would read and re-read Shel Dorf's various Blackthorne series of the great detective. On TV, he liked most westerns and good comedies. Particular favorites included BONANZA and THE MUNSTERS.
He was also an excellent cook, a horseshoe champion and a generous and supportive man who would dress up in a suit and tie to go down to the corner grocery.
He wasn't always there a lot as I was growing up. He worked odd hours at foundries, liquor stores, paper plants, and selling insurance. Anything to make ends meet. Finally, he settled into a comfortable and ridiculously high-paying job as a Post Office janitor from which he was able to retire with full government benefits after being struck by a car in 1978. He himself never drove again after that. After my mother died of cancer in late 1981, I decided against a planned move to my own apartment and he and I became like bachelor roommates throughout my twenties (even to the point where I once snuck a girl into my room after hours!). For the next nine years, I really got to know my dad and I liked him a lot. Then he had a stroke which completely incapacitated him for 16 months, turned my own life upside down just as I had fallen in love for the first real time and ate away all of the money he had been saving to pass on to me someday.
Go. Right now. Tell your parents you love them while it still matters. This morning my son told me...and it really made me miss my dad.
Posted by Booksteve at 12:43 PM