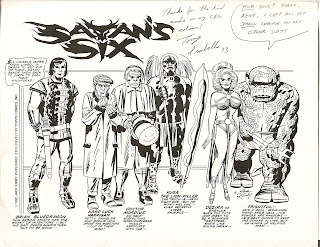 Here's a nifty little promo piece from the early nineties when former Marvel writer/editor Tony Isabella (http://www.worldfamouscomics.com/tony/) was working on Jack Kirby's SATAN'S SIX for the unfortunately unsuccessful Topps imprint, Kirby Comics. I've met Tony three times at Cons. The first was in 1975 in Cleveland when I was a mere lad of 16. The second was at a local Con in '93 when I, age 34, told him my wife was enjoying SATAN'S SIX and he signed this piece for her. The third was this past year in Columbus when I, at age 49, was able to introduce my wife to Tony, now a long-time 'Net pal! Time flies. Hi, Tony! Thanks for everything!
Posted by Booksteve at 4:57 PM