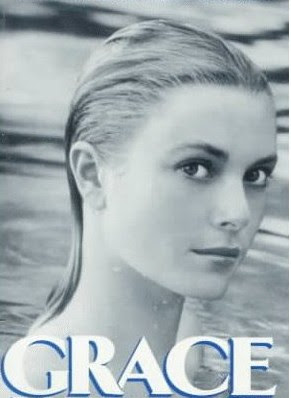 I want to go on record right now as saying that seeing Grace Kelly on the big screen for the first time in a late seventies revival of TO CATCH A THIEF was a revelation to me. Television simply does not do her justice. Grace Kelly is the single most naturally beautiful and sexy woman ever to appear

on-screen. There. I've said it. Apologies to Linda Blair, Hayley Mills and all of my other cinematic crushes but it's true! I honestly think the picture posted here on the left is, in fact, the sexiest photo I have ever seen. Yes, I know it's in color, too, but this version, from the cover of author Robert Lacey's biography of Kelly, is even better!
Check out today's update of my other blog, YOU'RE ONLY AS GOOD AS YOUR LAST PICTURE (http://youreonlyasgoodasyourlastpicture.blogspot.com/) for the full story on the future Princess Grace and her final Hollywood film.
Posted by Booksteve at 5:53 PM