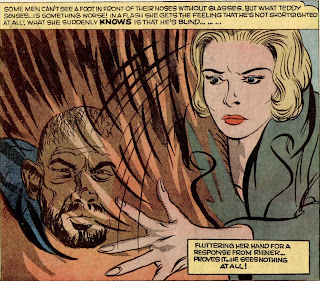 Ask any knowledgeable EC fan what their favorite non-MAD EC story is and you'll likely get one of two answers: JUDGMENT DAY or MAST

ER RACE. (If you aren't a knowledgeable EC fan, look 'em up.) For me, I'd go with the latter. In spite of my avowed love for all things Wally Wood and my great appreciation of Davis, Craig, Severin and Williamson, I would choose Bernard Krigstein's MASTER RACE. One reason for this is that Krigstein refused to be boxed in to the standard EC format and legendarily cut up and repasted the panels giving the story an impact and a look it would otherwise not have had. 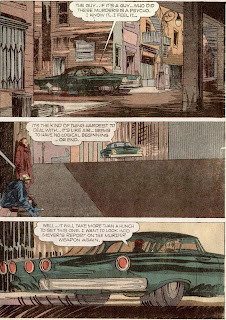 As a comic book artist, Krigstein's style was different to put it mildly. It took me awhile to warm up to it. Decades, in fact. (Same thing happened with me and Neil Young, actually. Warren Ze

von, too.)
I had presumed that like many of the other comic book artists who seemingly disappeared over the years that he had moved on into advertising or some other field after EC folded. Recently, though, I came across a Dell 87TH PRECINCT comic (FOUR COLOR #1309 from 1962) that spotlighted Krigstein's unique comic book artistry.
The story is based on the then-popular TV series starring Robert Lansing. The series itself was based on the still popular novels of the late Ed McBain. The plot deals with a blind artist who is also a serial killer. 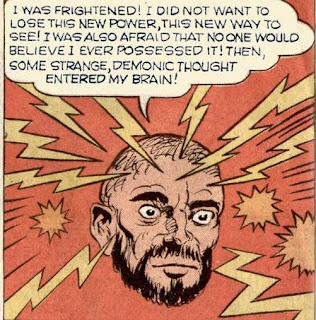 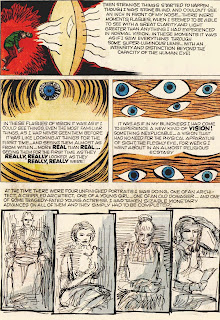 None of that matters though. What makes this comic cool is that Krigstein, even when toiling here on a licensed product, was still innovating with layouts and stylistic choices far beyond what the average reader of this comic book would have expected or cared about. Seen here are some choice examples!
Posted by Booksteve at 12:20 AM