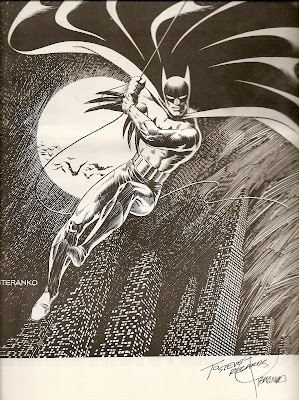 I mentioned in an email to a reader recently (Hi, Jim!) how, over the years, I've come to put James Steranko in a category by himself. If someone asks my favorite comics artists, I often don't think to include him just because he sort of transcended the industry with his HISTORY OF COMICS, his movie work (RAIDERS OF THE LOST ARK, etc.), his paperback covers and his literary media mogul status with COMIX/MEDIASCENE/PREVUE. Still, he IS and has been a favorite since I first noticed that those Nick Fury stories were a tad bit more...psychedelic than anything else on the stands. That was in 1966. In 1980 I finally met the Jaunty One himself at a Columbus, Ohio con. He was much shorter than I had expected (in both height and temperament) but graciously signed this cool retro BATMAN image from a 1977 MEDIASCENE for me!
Posted by Booksteve at 8:18 PM