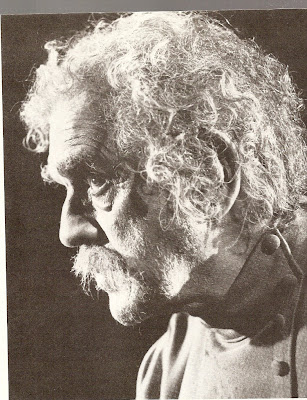 What is the first movie that you ever saw that truly scared the bejabbers out you? More than likely, the answer to that question will depend on many other factors than the movie itself--your age, where you live, what was happening in your life at the time, etc.
In my case, I know that I had grown up loving scary movies but never really been scared by them. That probably had a lot to do with my seeing pictures like THE GHOST AND MISTER CHICKEN and TV series such as THE MUNSTERS aand THE ADDAMS FAMILY. The first time I saw Boris Karloff in FRANKENSTEIN, I remember being more than a little sympathetic to the monster as opposed to scared.
Karloff, as previously noted here on this blog, was almost a grandfather figure to me growing up. He was elderly, kind looking and appeared on TV doing cartoon voices, dancing with Red Skelton and trussed up in drag on THE GIRL FROM U.N.C.L.E..
On this date 40 years ago, February 2nd, 1969, Boris Karloff died. I was just ten years old. In those horse and buggy days, news didn't travel so fast to us kids so I'm pretty sure I didn't even hear about it for months.
Sometime around 1970, SCREAM-IN, the local Saturday night horror fest, was running a Karloff movie I had never heard of at all-BLACK SABBATH. I decided to watch it thinking it would be nice seeing Karloff--my grandfather figure--looking alive and healthy again. It was almost as if a beloved family member was coming back to life. I watched it and from that point on never, ever thought of Boris Karloff as JUST a kindly old grandfather figure again!
BLACK SABBATH is an American re-edit of a 1963 Italian Mario Bava film. In Italian cinema, there is a tradition of offering features with multiple, unrelated storylines and this was one of those. I'm sure there's a name for it but I'm drawing a blank right now. Each short tale is introduced by Boris Karloff in much the same manner of his early sixties TV series, THRILLER which I recalled watching as a very young child.
The first two stories are boring...or at least the were to me that night.
The third tale is the one that actually stars Boris. THE WURDALAK is a creepy, atmospheric tale of an Eastern European family in the 1800's anxiously awaiting the return of their father who has gone off to kill a 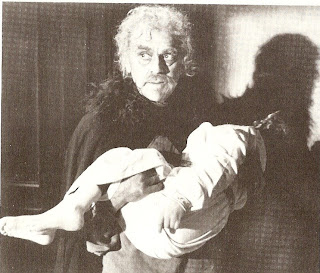 local bandit. A young man arrives at the home and is given shelter and agrees to wait with them. They explain that the father has warned them that if he is gone more than a week, he will return as a Wurdalak, apparently a particularly nasty, almost incestuous type of vampire that feeds on family members. In time the father returns and...
I had the worst nightmares I had ever had that night and for days afterwards!! My beloved grandfather figure returned from the dead and killed his family!! It could have been MY family!!
Boris Karloff was by all accounts a true gentleman, cultivated and with a strong sense of values and work ethics, a great sense of humor and a love for his fans but that Saturday night not that long after his death, I learned something else very important about him--He was also one HELL of an actor! I've missed him all the more ever since.
Posted by Booksteve at 7:17 PM