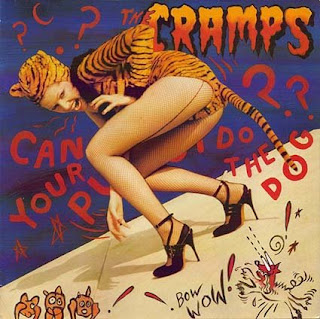 I wasn't going to write an obit for the just deceased Lux Interior whom I discovered--like many folks from what I read on blogs--in INCREDIBLY STRANGE MUSIC. He was a collector, a packrat and a pop culture historian of the first rank...and oh, yeah, he made some pretty good music over several decades, too! Seen here is the first CRAMPS record I bought. He called it psychobilly, I always referred to it as surf punk. Easier to explain when you try to tell folks about it. Anyway, I wasn't going to note his passing because frankly, everywhere I looked people on the 'Net were already doing so. I decided to write something because I just wanted to ask if anyone else felt that Lux would be absolutely astounded by just how much coverage his passing is getting? Goes back to what I was saying before--if you like an artist's work, find them on the Web and tell them about it while they're still with us!
Posted by Booksteve at 7:18 AM