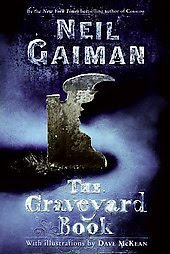 Yesterday on my other blog, YOU'RE ONLY AS GOOD AS YOUR LAST PICTURE, I noted that the book, THE STORY OF MANKIND, was the first winner of the Newbery Award for excellence in children's literature. Managing a bookstore for years asI did, I had to become quite familiar with the Newbery. Many's the time I found myself wondering when the choices were announced why exactly a certain title was chosen as they were often titles that, if we carried them at all, didn't even sell. Thus it shouldn't surprise me that THE GRAVEYARD BOOK by fellow blogger and pop culture superstar Neil Gaiman recently won this year's Newbery Award!
If it sold more than one copy at my store (and I believe that was to muse Brittany Rose!), I'd be surprised.
Still, with CORALINE opening this week in theaters, it couldn't have come at a better time to put Englishman Neil's name out there as, strangely enough, America's premier children's book author! Perhaps as big a surprise to him as to anyone else! See here: http://www.guardian.co.uk/books/booksblog/2009/jan/27/neil-gaiman-newbery-medal-controversy
An intelligent man, a clever man, a witty man, a nice man...you just never hear anything bad about Neil Gaiman. My wife and I saw him lecturing a few years back and it really was like going to a rock concert. People kept seeing a glimpse of a leather jacket up on stage and whispering, "Is it him? It's him! No..."
Like most Newbery books, this probably means teachers will flock to THE GRAVEYARD BOOK. Unlike many in recent years, it also probably means kids will on their own, too! Couldn't happen to a nicer guy.
Posted by Booksteve at 5:48 AM