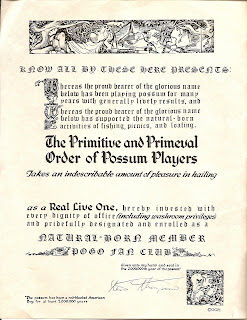 I'm sitting here admiring my Walt Kelly wallpaper (thanks, Jim!) and thought this a good time to trot out this fancy, impressively calligraphed, Kelly-esque scroll from the distant eighties. This was (and may still be for all I know) the certificate one received upon entry into the Official Pogo Fan Club. While it is notably lacking my name where it should be, you'll note thatsaid name does appear at the bottom anyway. I always feel compelled to explain that the Pogo Fan Club is run by a gentleman named Steve Thompson who is, contrary to the occasional confusion, NOT me. As previously pointed out, it used to drive the mailman nuts when I got the club newsletter and it looked as though it had been sent FROM me TO me!
Posted by Booksteve at 6:58 AM