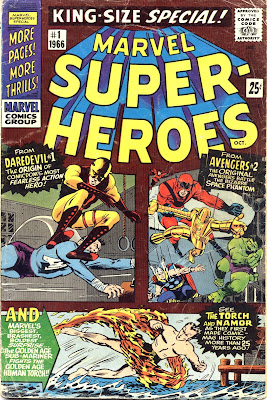 I gotta tell ya, back around 1970 this 1966 one-shot was the Holy Grail for us collectors and at our school there was apparently only one single copy that got traded back and forth fairly regularly (with me eventually ending up with it!). If you wanted this guy's stash of coverless 1965 JOURNEY INTO MYSTERY THOR's, offer him MSH # 1 and you had a deal. Then if he wanted that rare issue of FLY-MAN that he'd never even seen before, he'd offer MSH # 1. This particular copy, as I say, got around.

It was a cool book! I had purchased it myself at Woolworth's in '66 but my copy got tossed in one of my mother's then-periodic purges of my collection. First up, it reprinted AVENGERS # 2, a pre-Cap issue with the Hulk still a member...for the most part. Then you had DAREDEVIL # 1, his origin and the first time most of us had ever seen both that dorky yellow costume and that lovely Bill Everett artwork! Finally, the whole thing was rounded out with a reprint 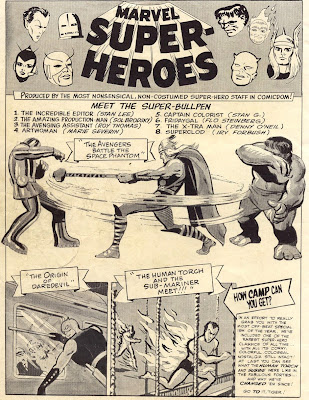 from the oh-so-mysterious "Golden Age." A Different Human Torch vs. a seemingly different Sub-Mariner!
Note, though, on the inside cover seen here how someone (Stan?) tries to apologize for and distance themselves from the Torch and Subby bit, dismissing it as "camp," which even under the prevailing bat-definition of the day it was not.
The text reads: In an effort to really grab you with the most off-beat special ish of the year, we've included one of the rarest super-hero classics of all time...with all its corny,colorful, colossal nostalgia still intact! At last you can see what the Human Torch and Subbie (sic) were like in the fabulous forties...and why we've changed 'em since!
So that's why Marvel kept refusing to bow to the readers' wishes for more Golden Age material (until Roy Thomas finally talked Stan into it). They were ashamed of it!
Posted by Booksteve at 1:06 PM