Movies That Fell Through the Cracks # 47 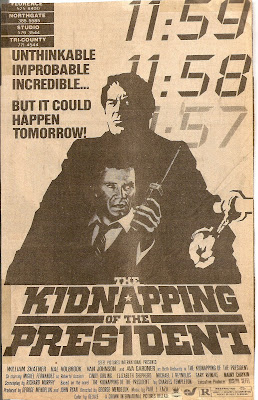 You know there's something odd about a movie when you have big, old-time stars like Ava Gardner and Van Johnson in it and yet top billing goes to... William Shatner?!! 1980's R-rated THE KIDNAPPING OF THE PRESIDENT is not a bad film, though. Not a good one either. With no international disrepect intended, it's a Canadian film. Canadian Shatner is in the Charlton Heston type role in charge of trying to rescue the President of the United States who is kidnapped by local terrorists while visiting Toronto and locked in a truck full of explosives. TJ HOOKER with better hair perhaps?
In spite of the pre-911 extreme premise (and its ensuing blood), it comes off as somehow boring up until the end. The real attraction here is, in fact, the unusual cast that toplines the now legendary "Shat" in one of his few non-STAR TREK leads on the big screen...and he's NOT bad. Hal Holbrook is well-cast as the President with Van Johnson seeming a bit odd as his Vice-President. Johnson at this point was at a low point in his long career alternating between LOVE BOAT and Italian language potboilers. Ava Gardner, by contrast, was still getting good billing in at least one major production every year or so.
The rest of the cast is rounded out with familiar-looking character actors whose names you probably can't recall but you know they were on CSI or LAW AND ORDER more recently. This one seems to be out there on video but I've never run across it. Based on a fairly popular novel of the time it was adapted for the screen by veteran Richard Murphy.The director went on to do a lot of television right up to the present.
Posted by Booksteve at 11:54 AM