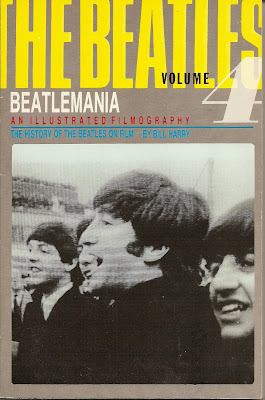 Quick fab Four fans! How many movies did the Beatles make? The casual fan would probably answer "four"-A HARD DAYS NIGHT, HELP, the animated YELLOW SUBMARINE and the documentary LET IT BE. But then there's also the TV film, MAGICAL MYSTERY TOUR. And what about the fact that the Lads had little to do with YELLOW SUBMARINE? And do we count solo projects like HOW I WON THE WAR with John? Hmmm....No easy answer, really.
The best answer, however, is this book from 1984. Bizarrely titled THE BEATLES VOL.4, BEATLEMANIA, AN ILLUSTRATED FILMOGRAPHY, THE HISTORY OF THE BEATLES ON FILM by Bill Harry (Whew!), it is an obsessive chronicle of all of the film appearances of John, Paul, George and/or Ringo from television to the big screen and group efforts and well beyond! And I DO mean all!
Besides the four (five) features named above, all of the group's British TV specials like AROUND THE BEATLES and THE MUSIC OF LENNON AND McCARTNEY are discussed.
Then we move on to Ringo in LISZTOMANIA, SON OF DRACULA, BORN TO BOOGIE, THAT'LL BE THE DAY and CAVEMAN (amongst many others).
John is represented by such fare as his avant-garde films with Yoko, THE ONE TO ONE CONCERT and the notorious OH, CALCUTTA! Seriously, how many Beatles fans know that John WROTE the Lone Ranger masturbation sketch in that infamous all-nude stage play (and its subsequent movie version)? It's probably the funniest sketch in it, too!
Paul's inventive music videos are discussed along with many unrealized feature film projects, ROCKSHOW, WINGS OVER THE WORLD and the flop vanity feature, GIVE MY REGARDS TO BROAD STREET.
George ended up arguably the most successful in pictures as, along with THE CONCERT FOR BANGLADESH, he set up his Handmade Films to rescue LIFE OF BRIAN, THE LONG GOOD FRIDAY and others. He ended up producing and/or distributing many hit films such as TIME BANDITS and a few major flops including Madonna's SHANGHAI SURPRISE. He even appeared in the Rutles TV movie ALL YOU NEED IS CASH which gets its own chapter!
Along with every group TV appearance throughout the world, there are listings and/or discussions of Beatles-RELATED projects such as ALL THIS AND WORLD WAR II and the delightful I WANNA HOLD YOUR HAND with Nancy Allen and Eddie Deezen.
In the back there's a Who's Who in Beatles film history, a look at the TV cartoon series and an article about unrealized Beatle projects, all rounded off with two pages of the most insignificant (but interesting to us fans!) TV cameos on chat shows and news programs!
Long out of print and, in Paul's case especially, out of date, this is nonetheless the definitive history of the hundreds if not thousands of Beatle film appearances! Four? Yeah, right. What were YOU thinking? And you call yourself a Beatlemaniac!
Posted by Booksteve at 7:14 AM