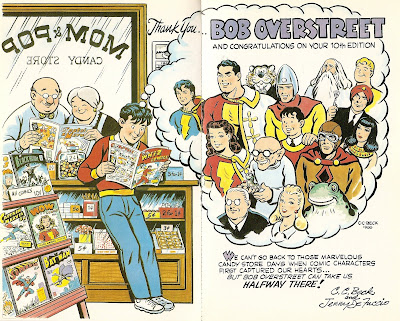 I have always collected comic books for the enjoyment of the books themselves, not for any given issue or title's value as a collectible. Thus, I did not get early editions of Bob Overstreet's COMIC BOOK PRICE GUIDE that began in the early seventies. Eventually, though, it became obvious that I needed to keep up on what kind of prices to expect from dealers so, starting with the 1976 edition, I became a follower...at least until the early nineties. After that, I went back to not caring again as I couldn't afford the damn things anyway!

Recently, though, I was looking back through my Overstreet collection and noticed they had some truly great trade ads, often with rare artwork never reprinted anywhere else. Herewith, then, we proudly present the first in a series showcasing some of these ads. Please note that these ads are loooooong out of date so it would just be foolish of any of you to try to order anything in the ads.
Up first, CAPTAIN MARVEL's pappy, the irascible C. C. Beck (along with Jerry De Fuccio), congratulates Mr. Overstreet on his 10th anniversary Price Guide and uses Billy and a host of Fawcett characters to do so in a lovely two-page spread from 1980.
Posted by Booksteve at 6:05 PM