The Mad Goblin/Lord of the Trees 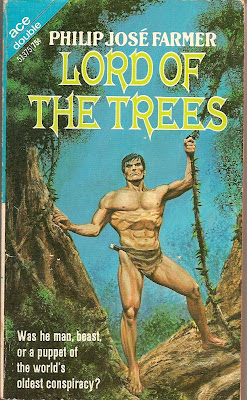 Author Philip Jose Farmer established a lasting legacy in the field of science-fiction with his Riverboat series but before that, he was known for several other things, one of them being the "biographer" of both Tarzan and Doc Savage. Farmer's book TARZAN ALIVE, with its speculative take on the jungle lord based on information from the original Edgar Rice Burroughs books, actually hit the bestseller lists. His later volume on Lester Dent's Man of Bronze (who was then at the peak of his paperback reprint popularity), DOC SAVAGE: HIS APOCALYPTIC LIFE, was an even more fanciful bio.
Even before that, however, Farmer had dealt with the characters, albeit in pastiche, in the X-rated novel A FEAST UNKNOWN and it's PG-rated double spin-off, LORD OF THE TREES and T 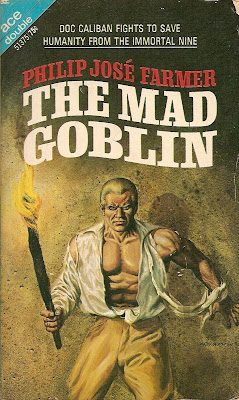 HE MAD GOBLIN.
Release in late 1970 as an Ace double--two generally unrelated genre titles that can be flipped--the two books were actually in a strange way only one. At the end of the previous book, both characters head off in search of a mysterious organization (you know the type). In THE MAD GOBLIN, we see Doc's take on what happened next. LORD OF THE TREES presents the Tarzan character's version. The two meet up at the end as the stage is set for the inevitable sequel...that never came. Both volumes, according to Farmer, are actually memoirs from the main characters, "Lord Grandrith" and "Doc Caliban."
Farmer 's eclectic career has embraced everything from high class speculative fiction to flat out unapologetic pornography (his book IMAGE OF THE BEAST was incredibly disturbing to my 15 year old brain!) but at his heart, he's a pulp writer and with these two books, he runs with it!
Farmer would later create the pulp-ish character Greatheart Silver for the WEIRD HEROES paperback series and ultimately was able to write a REAL Doc Savage novel when the long-running paperback series ran out of stories to reprint!
This Ace double is spotted from time to time at Cons and used bookstores and is usually a tad pricey but it's worth it if you're a Farmer fan, a pulp fan or especially a fan of Doc Savage or Tarzan.
Posted by Booksteve at 10:20 AM