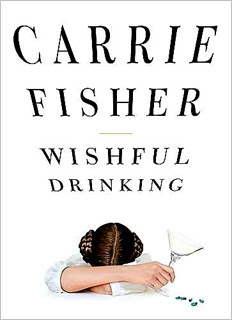 Today is, of course, the biggest shopping day of the year...except where I work where, in fact, it may well be the slowest day of our year. That said, it afforded me the opportunity to read Carrie Fisher's autobiographical new book, WISHFUL DRINKING (Yes. The entire thing. It was that slow!). Technically, the book is not an actual autobiography but a literary translation of the one-woman show the actress/writer has been performing for a couple of years now. Still, there's enough of a linear "this happened, then this, then this" to make it seem a straight autobiography.
I'd seen a couple of reviews where they talk about Carrie whining once again about her childhood. Yes, she is. It's an ongoing thing with someone who's trying to come out a better person in spite of her life rather than because of it. What those reviewers seem to have missed is just how funny Ms. Fisher is here. Whether dissing Papa Eddie's libido, detailing Mama Debbie Reynolds' eccentricities or sharing which STAR WARS actor had the best dope, she is sarcastic, caustic and dryly hilarious. Even though the backdrop of the entire piece is her mental issues and subsequent electroshock therapy, there's rarely a completely serious page here. Even her issues with LSD lead to a hilarious anecdote about becoming telephone friends with Cary Grant! There are some carefully chosen pictures throughout (including one with Liz and Dick doing to Eddie what Liz and Eddie had done to Debbie!)

Is it a happy book? No. A generation or two loves Carrie Fisher in ways that she is still struggling to understand. It is, however, a surprisingly fun book as she lets us take a revealing peek beneath the surface at that very struggle. And what we see there is that there's still hope.
Posted by Booksteve at 5:11 PM