Movies That Fell Through the Cracks # 44 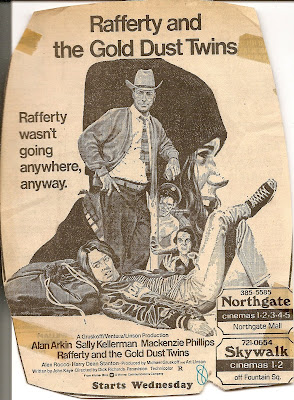 I actually paid to see RAFFERTY AND THE GOLD DUST TWINS three times at the Skywalk Cinema in downtown Cincinnati back in '75. It was so good I named it the BEST movie I saw all that year! What's that? You never heard of it? Yeah...a lot of that going around. Seems the film opened to good reviews, had only a fair initial run at the box office and ended up sold to TV as RAFFERTY AND THE HIGHWAY HUSTLERS...then just went away.
Alan Arkin stars during a peak period in his career. Sally Kellerman, still coasting on 1970's bravura performance in M*A*S*H co-stars as do Mackenzie Phillips and Charles Martin Smith, both fresh out of AMERICAN GRAFFITI. All of them give standout performances in this dramedy about a lonely driving instructor abducted by a woman and a girl travelling cross-country to make the woman a country singing star. This film was also the first place I ever noticed the great character actors, Alex Rocco and Harry Dean Stanton! Heck, even the great Louie Prima appears!!
I had previously seen Mackenzie Phillips in a similar role on TV in a HALLMARK HALL OF FAME special entitled MILES TO GO BEFORE I SLEEP opposite Martin Balsam. (Oddly her character there was named "Robin Willimas.") In the closest thing she ever had to a starring role on the big screen (before moving on to TV and tabloids), Mackenzie shines here as the surly "Frisbee."
Arkin is always a joy to watch as an actor but his character here is depressed and laconic, easily bested by the stronger female roles.
This type of movie, if it turns up at all these days, is usually a TV movie--too serious to be a comedy and yet too comical to be taken seriously. With some great individual set pieces and a satisfying ending, though, in 1975 I thought this was the best of the best. If you get a chance, I think you might like it!
Posted by Booksteve at 4:03 PM