The Films of Michael Crichton 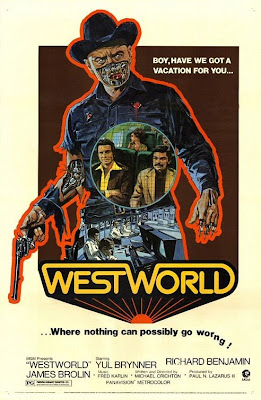 Everyone's familiar with the novels of the now-late Michael Crichton but how many remember his movies? No, I don't mean the big-budget spectaculars like JURASSIC PARK or RISING SUN that were adapted from his bestselling books. I'm referring to his promising but ultimately abandoned career as an auteur film director in the 1970's and '80's. As a director, Crichton was a stylish filmmaker who, perhaps surprisingly, chose to adapt few of his own books. He did, however, write screenplays--most original--himself for nearly all of his pictures.
Below, a brief look at the films of Michael Crichton as director.
Pursuit (1972) After the theatrical success of THE ANDROMEDA STRAIN, the author managed somehow to get the coveted chance to direct this Movie of the Week TV adaptation of his early pseudonymous novel BINARY (by "John Lange") about a terrorist with stolen nerve gas attempting to assassinate the president at a political convention. A stellar cast of character actors starred including Ben Gazzara, William Windom, Joseph (DR. NO!) Wiseman and a young Martin Sheen.
Westworld (1973) This is the one that put him on the map. With its memorable ad campaigns ("Westworld...where nothing can POSSIBLY go wrong...go wrong...go wrong...go wro..." and the bizarre concept of bald Yul Brynner reprising his MAGNIFICENT SEVEN gunslinger as a robot (!), WESTWORLD was a huge hit in its day. The plot is actually similar to that of JURASSIC PARK. Here you have an amusement park in which real folks can interact with period-correct realistic robots in one of several historical settings. Our two amiable heroes are played by Richard Benjamin (then enjoying a successful big-screen career) and James Brolin (father of Josh) just starting out in films after success as a TV doctor. They enjoy their excursion into a virtual Old West until people start getting hurt ...and killed... for real. There's action, humor and genuine suspense, very little of which were successfully duplicated in the Crichton-less sequels and subsequent TV series. Coming soon is a remake.
Coma (1978) Adapted from Robin Cook's early medical thriller, this was an excellent choice for Crichton as Cook has spent many years since trying to BE Crichton it seems! A doctor himself, Crichton excels here at heightening the suspense as a young female doctor (Genievieve Bujold who was later originally cast as Captain Janeway on STAR TREK VOYAGER) pieces together a mystery involving many patients ending up in mysterious comas and shipped to a mysterious institute. Ironically, Michael Douglas co-stars. "Michael Douglas" was also one of the author's several early pen names..
The First Great Train Robbery (1979) When I saw this it was just called THE GREAT TRAIN ROBBERY. I LOVE a good train movie and this is one of the best. Sean Connery, so far removed from Bond as to seem a different person, stars opposite then-popular Donald Sutherland, one of the quirkiest and best film actors of the period (and, of course, father of Kiefer). Inspired by but not literally adapted from an actual gold robbery in Victorian Britain, this is a caper film in the OCEAN'S 11 vein with our anti-heroes aided and abetted by Lesly-Anne Down, easily one of the sexiest actresses of her day!
Looker (1981) 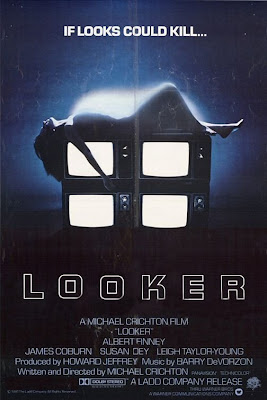 Here we have Crichton predicting the future. LOOKER deals with a new technology that enables one to make films or still photos of models/actors whose every move has been programmed into a computer...without needing the participation of the real people! Imagine not having to cater to the whims of those pesky divas just to get a movie made or an ad campaign shot. The problem is, of course, that the real folks take offense...so they have to be disposed of! Another A-list cast features Albert Finney, James Coburn and TV Partridge Susan Dey, here nearing the end of her not bad try at feature film stardom. Today, of course, we have Fred Astaire dancing with vacuum cleaners on commercials and Bruce Lee hawking soft drinks (I think) on Far East TV. Crichton was right.
Runaway (1984) Six years earlier, Tom Selleck had a small role in COMA. Here, on the strength of TV's MAGNUM PI, the likable, rugged actor headlines yet another techno-thriller, this one about a near-future in which robots are everywhere in society. KISS's Gene Simmons is suitably menacing as the nasty villain.
Physical Evidence (1989) Five years later, Crichton chose this unlikely project to be his final film as a director. Using someone else's screenplay this time, this is a hard, violent crime drama casting Burt Reynolds against type and featuring Theresa Russell and Ned Beatty ( as well as David Cassidy's ex-wife, Kay Lenz!). Not having seen it, I can't tell you much else on this one. After it, though, Crichton metaphorically hung up his director's cap (although IMDB credits him with uncredited reshoots on THE 13TH WARRIOR) and was content to let others adapt his work. He served as producer on several projects including--in a return to his medical roots--TV's long-running medical series, ER.
RIP Michael Crichton
Posted by Booksteve at 6:29 PM