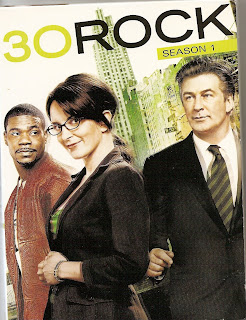 If, like myself, you're one of the many who never noticed the TV series 30 ROCK until after recent events made Tina Fey a perhaps unexpected hottie, here's your chance to make up for it! After a particularly trying day at work, I had to stop by WalMart for some milk and noticed that they had the first season of 30 ROCK on sale for only $14.96! With all 21 episodes on 3 discs, that works out to less than 72 cents per episode!

Been watching recent episodes on HULU.com but now I can catch up. Tina writes, produces and stars in this smart comedy along with a brilliant ensemble cast that includes fellow SNL alumnus Tracy Morgan, ALLY MCBEAL's Jane Krakowski and Alec (THE SHADOW!)Baldwin who slyly steals almost every scene he's in! The whole thing is presented in a combination of traditional sitcom style, sketch comedy and, at times, a surreal send-up of the hands that feed them. If you haven't watched it, I suggest starting. If you've been enjoying it all along, I envy you. Go to WalMart and pick up the set so you can watch it all again!
Posted by Booksteve at 10:49 PM