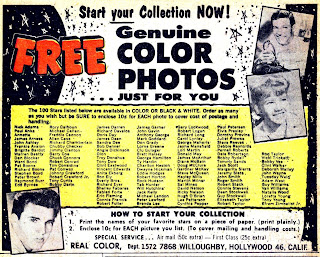 In case you young folks are wondering why the emphasis on color in this early sixties ad, keep in mind that much of the entertainment world was still black and white at that time. Thus color was a major selling point. Being the geek that I am, I am naturally familiar with nearly all of these "stars." What interests me most, in fact (other than the fact that Annette still had to go without a last name and yet Fabian gets one!),is the number of folks I'm not familiar with at all. So I looked 'em up.
Alan Case- Case had been the title character in 1959's THE DEPUTY (opposite Henry Fonda's Marshal) and later co-starred as brother Frank on 1965's LEGEND OF JESSE JAMES.
Barry Coe-a fairly prolific character actor of the period who would later be known in commercials as TV's "Mr. Goodwrench."
Pat Conway-Lots of westerns including the sheriff in the long-running TOMBSTONE TERRITORY through 1960.
Robert Crawford, Jr- again, westerns, this time with a regular role on LARAMIE in 59-61
Richard Davalos-starred in THE AMERICANS, a TV series I'm not familiar with at all. Still working apparently, he's listed on IMDB as appearing this year in the marvelously titled NINJA CHEERLEADERS!
Richard Eyer-a prolific child actor on fifties TV
Lori Martin-star of the TV version of NATIONAL VELVET and the daughter in the classic CAPE FEAR, she worked steadily through the sixties.
Donald May-starred in THE ROARING 20's (one of my mother's favorite shows!) and later on soaps.
Cynthia Pepper-had the title role in the fairly forgotten early sixties sitcom, MARGIE
Jack Scott-Probably this guy--JACQUES Scott, fairly active in TV in the early sixties
Vicki Trickett-Hmmm...didn't do much but worked with the Three Stooges and Ozzie and Harriet!
And that's it. Believe it or not, I actually have heard of all the others and can cite at least one major credit without having to look it up! How about you?
Posted by Booksteve at 11:10 PM