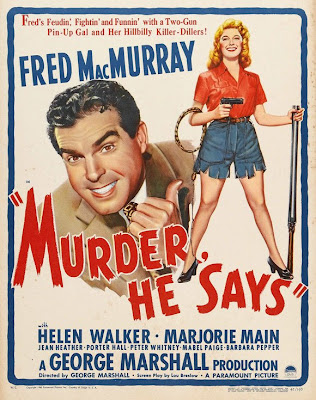 I first saw this George Marshall-directed 1945 movie on TV back in the early 1980's and have never been able to get its gimmick "song" out of my head. It was to the point that I had taught it to my son (along with other important things such as "swordfish," "42," and "Who's on 1st."). Today, for the first time, I showed him the movie...and he didn't like it. Too dark. Too long. Just not funny.
To be fair, it is, as its title suggests, a black comedy. According to IMDB, it was originally tailored for Bob Hope and it certainly plays like a Hope vehicle of the period. Fred MacMurray stars as a Trotter pollster ("We're like the Gallup poll...only slower.") who goes up into the hills looking for his missing predecessor. There he finds the Fleagle family--a family similar to the one we meet in the much later TEXAS CHAINSAW MASSACRE! Marjorie Main is a wicked delight as a homicidal Ma Kettle and big, burly Peter Whitney is fun in a suberbly done dual role as her Jethro-like twin sons. Jean Heather is the less-than-present, ethereal daughter who constantly sings the song--"Honors flisis, incomb beesis, onches knobis, inobb kesis." Along with Main's new husband played by Porter Hall, they're all searching for 70,000 dollars stolen by distant relative Bonnie Fleagle. Helen Walker (a sad and fascinating story herself. Look her up.) stumbles into the plot pretending to be tough escaped convict Bonnie Fleagle while Barbara Pepper (much later on GREEN ACRES as Mrs. Ziffel) later arrives as the even tougher, real Bonnie Fleagle. There's twists, turns, hidden passageways, dead bodies, and even a spooky organ. In fact, it has everything a good Bob Hope movie should have. There's even a plot reference to Bob Hope! MacMurray fulfills his assigned role nicely, however, showing early on here the flair for flustered comedy that would serve him well years later at Disney. He even does well in the few romantic moments. The fun here, though, is clearly the downright unrepentently evil Fleagles and our heroes' efforts to thwart and/or escape them. All of it ties up neatly (a little too neatly perhaps) at the end and you're left wondering what Fred's career might have been like if he had continued in this more light-hearted vein at the time instead of waiting another fifteen years or so.
Posted by Booksteve at 11:12 AM