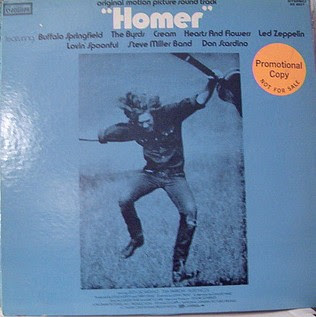 Ever wonder whatever happened to an actor you might see in a movie from twenty, thirty, sixty years ago? Me, too! Back in the mid-1970's I picked up a copy of the soundtrack album seen here (this is not my copy as mine won't fit on the scanner). I got it for small change at a cut-out bin at Otto's Drugstore (which is now the eye doctor where bookdave and Rene go). As soundtracks go, it was really cool! And I mean REALLY cool! Led Zeppellin from their first album! The Lovin' Spoonful! The Byrds! Eric Clapton with Cream!Early Steve Miller Band! Buffalo Springfield (long disbanded even then)! and Don Scardino! Err...who? Well, actually, Don Scardino, a young and reasonably obscure character actor, somehow scored the lead role in 1970's HOMER. With the rest of the cast and creators equally obscure, this particular coming of age film kind of disappeared. Only the music survived. I know what happened to Jimmy Page and friends as well as to Roger McGuinn, Stephen Stills, Neil Young, etc. Steve Miller never really went away and John Sebastian's Spoonful went into the Rock Hall of Fame a few years back. Every time I looked at that soundtrack album, however, I found myself wondering whatever became of Don Scardino.
Cut to last evening when I noticed the ever-delightful HULU site was running current episodes of 30 ROCK, a series I'd always wanted to see...particularly since the country (and I) realized Tina Fey was hot! Not only did I absolutely LOVE 30 ROCK (after sitting through multiple episodes) but the producer/director was listed as one...Don Scardino!!! A quick check of IMDB and I find it was him! He had long since become a director and helmed multiple episodes of HOPE & FAITH as well as various other hit and not-so-hit series in recent years! Congratulations on your success, Mr. Scardino. Looks like sometimes, there ARE happy endings in Hollywood. Think I'll go play that soundtrack again, now. Hmm... Hearts and Flowers? Wonder whatever became of them?
Posted by Booksteve at 11:50 AM