The Ballad of the Green Berets 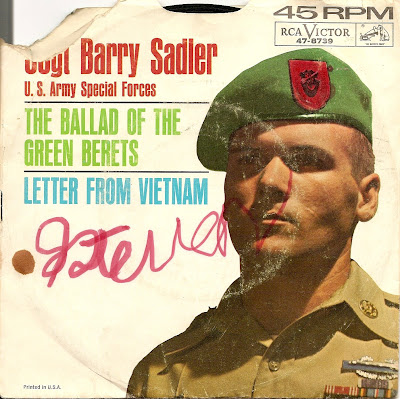 For Veteran's Day, before heading off with Snoopy to quaff a few root beers with Bill Mauldin's ghost, thought I'd show you the very first "grown-up" record I ever owned (at age 7). Here we have one of 1966's biggest chart hits, THE BALLAD OF THE GREEN BERETS by SSgt Barry Sadler. Sadler was a stoic figure. He was put forth as the best this country's military had to offer. He hit all the TV variety shows in full uniform and never seemed to crack a smile. In reality a wounded veteran himself, he recorded a whole album of Vietnam-related songs that didn't go anywhere near the success of the single.
The song itself is reasonably catchy albeit extremely right-wing sounding today. Sadler's bland delivery of it does not hold up at all, however. When it came out, the anti-war sentiment was just building. I was seven. All I knew was it was a good and patriotic thing to support your country and its military. Eventually, I came to understand that that was true but not to do so blindly!
For his part, Sadler failed at a follow-up and then failed again as an actor. He seemed to find a niche when he created CASCA, the popular series of violent pulp novels about an "eternal warrior" who fights in every war throughout history. The series seeemed to go on forever. Again, though, in reality, Sadler had only written the first few before the publisher began hacking them out under his name.
He ended up in South America, allegedly running guns to the Contras. There was some talk of drugs, also. He was found shot in a cab in a still-mysterious incident and ended up in a coma for nearly a year before passing.
Still, no one can ever take away 1966, where, for one brief moment, between Beatles songs, the country's patriotism swelled to the strains of THE BALLAD OF THE GREEN BERETS.
Posted by Booksteve at 8:12 AM