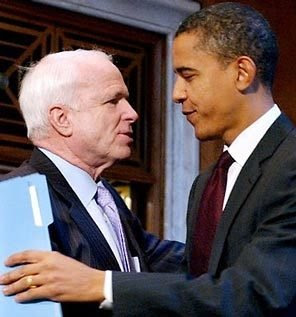 Tommorrow is Election Day. If ever there was an appropriate time to talk politics, this would seem to be it. So why have all of the candidates been acting like this is professional wrestling with good guys and bad guys? Let's get real, people. John McCain is a good man who thinks he can lead this country out of tough times. Barack Obama is ALSO a good man who feels that he can do the same. I tend to think the latter has a better chance but that doesn't mean I hate the former. Nor does it mean I hate you if you support McCain. Neither one of them is the Anti-Christ. Neither one is a Muslim, either. Or a Communist. If Obama wins, I guarantee you it is not his intention to "go after our guns and our religion" as a truck driver told me earlier today. Neither will his policies set out to destroy small business or penalize the wealthy.
Joe Biden is also a good man and a good choice for the vice-presidency. He does have a tendency to shoot his mouth off from time to time but isn't that better than Dick Cheney shooting someone else's face off? Would you really want a VP that was a sycophantic yes man? I'd rather have one with a mind of his own.
Which brings us to Sarah Palin. Seriously, I know she's popular but if you think about it, it's for all the wrong reasons. She was a bad choice, pure and simple, probably forced on McCain in a gamble to pick up the alienated Hillary Clinton vote. Whoever chose her apparently missed that it wasn't just the fact that Hillary was female that we liked--it was the fact that she was a strong, intelligent woman with good ideas. Joe Lieberman, whom my wife met during the 2000 elections, would have been a better and more logical choice. As it is, the McCain and Palin "team" has become the cartoon ticket. The only ones laughing with them and not AT them are those who are buying into their rhetoric.
That's what it is, too. Rhetoric. Both sides boast and posture while spinning every little detail so as to make it look negative for the other candidate, resulting in outrageous and untrue claims that may yet turn out to be harmful. It's all an act, a game. Aren't conditions in this country and the world a little to serious for us to be playing games in this election?
I'd love to have us win the Iraq War. Someone tell me how. We've already killed the evil dictator and strengthened their country's economy. What's our goal? How do we know when we've won and what we have to do to get to that point? I really want to know. While we flounder around with undefined goals in Iraq, Americans are being killed every day serving their country but for what? And then, of course, there's Osama Bin Laden. Are we even doing anything to catch him anymore? If so, what?
Barack Obama is a charismatic man who makes a great speech and has brought hope to many of us at a time when we thought it perhaps lost forever. He talks of strengthening our health, our education and our patriotism. He also talks about us giving BACK to our country in ways that many of us have long since left in the past. He speaks of us coming together in this new century and helping our country survive and thrive again.
John McCain talks of change, also, but his ideas of change look backward and yet this year, more than any other, it would seem the time is right to look only forward. No matter which one of them wins, he will be tested. That's just the way the world is these days. Hopefully, he will be able to accomplish something and not have to spend the next four years being dogged by campaign lies. Vote tomorrow. I really don't care who you choose but vote! Don't base your choice on the attacks and ridiculous claims of the campaign, though. Use your brain! Vote your heart, your mind and your conscience. Whether or not we like the idea, change is coming...and ALL change has the potential for good. We just have to work with it.
Posted by Booksteve at 5:09 PM