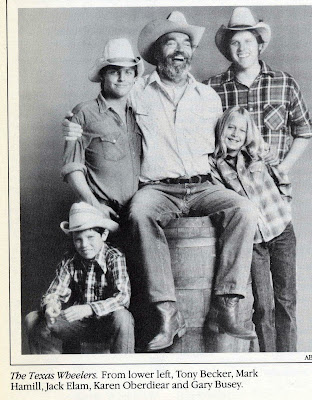 Jack Elam was a working actor. He worked a hell of a lot, appearing in nearly every western (or so it seemed) made during his career (just as Ward Bond had done earlier). He also did great comedy, serious drama and even a little variety. THE TEXAS WHEELERS, his 1974 sitcom, was just another brief stop in his long and varied career. Five years after if failed, he'd try again with an even less interesting premise in LIGHTNING STRIKES. He played a humorous Frankenstein monster.

Still, what if THE TEXAS WHEELERS, which featured him as a crusty old patriarch of a good ol' down home family, had been a hit. The series co-star (and ostensible romantic poster boy) was Gary Busey. Busey could (and may be!) known as Abusey, based on everything to which he subjected his body in the years since. Most recently, he's been diagnosed with brain damage due to a long ago motorcycle mishap. What if the series had taken off? Maybe he never would have gotten his breakthrough role as Buddy Holly because he was still contracted to the series! Maybe no substance abuse issues though either. Possibly he might have even worn a helmet!

His younger brother on the series was played by Mark Hamill, still a teen but already a veteran actor. Hewent from here to playing opposite Linda Blair in SARAH T.-PORTRAIT OF AN ALCOHOLIC. He was then cast as the older son on EIGHT AS ENOUGH (and immediately replaced by Grant Goodeve). Would his career have thrived after a hit sitcom or would he have been typecast? Would George Lucas have looked at him a few years later and thought "Hmmm...can't cast him as Luke Skywalker. Everyone will recognize him from THE TEXAS WHEELERS.

Things might have been very different if this show had been a hit. Of course, you can do this kind of speculation with many failed shows. Feel free to offer your own.
Posted by Booksteve at 2:35 PM