Wonder Woman and the Riddler 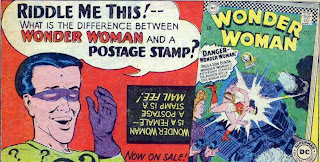 Here's one I had completely forgotten until I saw it again this morning! Just how popular was that ol' BATMAN TV show in 1966? Popular enough that the Riddler, a relatively unimportant Bat-villain given street cred by appearing in the TV series pilot two-parter (they were, of course, ALL two-parters initially!) was put to work advertising NON-Bat comics such as WONDER WOMAN!
Posted by Booksteve at 12:49 PM