The Radio Adventures of Sam Spade 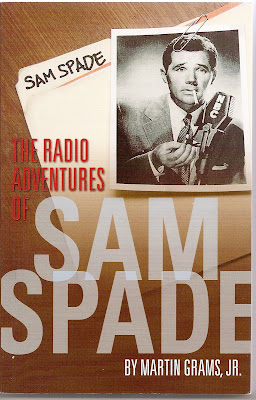 When you consider the amount of money I spent on the Radio Con this past weekend it's sobering to realize that I still only ended up with one book. Most of the money went toward gas, food, admission, soft drinks, snacks and amusements for young bookdave. Still, the book was one I'd been waiting for ever since I first heard of it from the author a couple years back. Martin Grams, Jr is the astonishingly prolific (and astonishingly young!) author of THE RADIO ADVENTURES OF SAM SPADE.

If you only know Spade as the hero/anti-hero of Dashiell Hammett's THE MALTESE FALCON, then you've actually missed his most popular incarnation! From 1946 through 1951, radio offered weekly whodunits with the sarcastic private eye and his ever-faithful secretary, Effie. Epitomized for most of its run by actor Howard Duff (who I first noticed as ludicrous BATMAN villain Lord Phogg opposite his then-wife Ida Lupino's Lady Peasoup!), the series was clever, witty and even a tad romantic! Martin's book is, as one might expect, largely an episodic rundown but Martin has amassed a surprising amount of trivia regarding many of the episodes, too. The book also offers both a literary and cinematic history of the character as well as sections on the Communist witch hunt issues of Hammett and, by association, Duff (which perhaps led to the "Charlie Wild, Detective" series introduced by sponser Wildroot). THE RADIO ADVENTURES OF SAM SPADE is a welcome addition to the annals of radio series research and an overdue tribute to a show and a man who were amazingly popular until the moment was cut short by the Communist witch hunts!
Posted by Booksteve at 12:44 PM