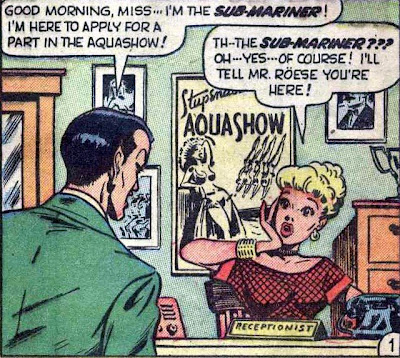 Okay, so last time we did Aquaman in space. I felt it appropriate then to feature another fish out of water this time. Yep, that's Bill Everett's SUB-MARINER in that suit. Namor the First! The Avenging Son! IMPERIUS REX even! Only here, during his mid-fifties revival, he's wanting to join an Aquacade. Do they still have Aquacades? They consisted of lots of folks in pretty, shiny swimwear doing fancy diving, water-skiing and swimming tricks. Maybe that's what he was trying to forget that ended up with him getting amnesia for seven or eight years soon after this.
Posted by Booksteve at 10:45 AM