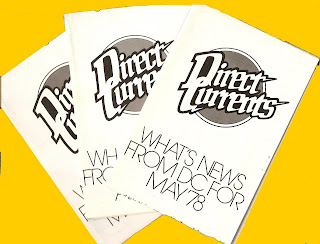 Any of you old geezers out there remember these? This was the way we got our DC comics news in those pre-Internet days of thirty years ago. Beginning in March of 1978 and lasting slightly over a year, these little foldouts popped up in our mailboxes with news, gossip, art and articles about life in the DC offices, the upcoming SUPERMAN movie and the DC Explosion (as well as the nigh-immediate Implosion!).
Back in the go-go check days of a dozen years earlier, DC began a little half page yellow box of comic previews in every issue of every title. It was entitled Direct Currents. I remember reading these promos in GREEN LANTERN and suddenly NEEDING to go out and plop down my 12 cents for next week’s AQUAMAN! Advertising works!
The Direct Currents concept expanded and, in the early seventies became a multiple page addition to each issue of DC’s proprietary prozine, THE AMAZING WORLD OF DC COMICS. After its perhaps inevitable demise, this newsletter cropped up with its poster-sized cover reproductions and insider articles. Believe it or not, this version of DC was followed up with the DC HOTLINE, a free weekly telephone recording narrated by the writers and staff at DC (Paul Kupperburg was the best reader as I recall). At some point, I’ll type up the list of who narrated which calls on which date and what they talked about!
Posted by Booksteve at 8:01 AM