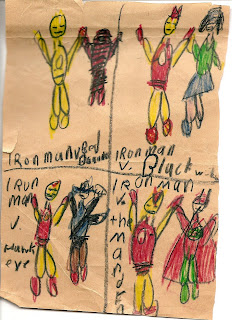 When I was a kid, one of my absolute favorite comic books was TALES OF SUSPENSE featuring IRON MAN and CAPTAIN AMERICA. Although nearing the end of its run by the time I started collecting, I was able to pick up a considerable number of back issues for either a nickel or a dime each (depending on whether I got them at Horn's junk shop or Keith's CarryOut) so I was well-versed in the history of the characters. Here, drawn on the back of a second or third grade arithmetic test, are 4 images of IRON MAN and friends from TALES OF SUSPENSE back issues. I assume they're fighting although to my more mature eye, they now appear to be dancing. We have the original, golden avenger version of Shellhead (albeit skinnier looking than he actually was) tangoing with what appears to be a mini-me version of the Crimson Dynamo. Then there's the pointy-helmeted version waltzing with the Black Widow, a slightly later version spinning with Hawkeye (note the color scheme for Hawkeye's costume as done in one early SUSPENSE) and finally the then-current version slamdancing the Mandarin. This summer's IRON MAN film may be the only movie we actually get to his year. Can't wait!
Posted by Booksteve at 10:05 AM