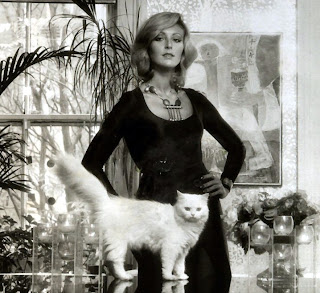 So...anybody catch anything interesting on TV this weekend? Seriously, I think Anthony Venditti and crew did a pretty good job with Saturday evening's Christa Helm investigation on 48 HOURS MYSTERY. Christa was a complex, complicated and conflicted woman but she was also a strong, smart, charismatic woman. It's easy to call her names for her lifestyle and her excesses but the seventies WERE the "Me Decade" after all and she was hardly alone in those ways. It's just that she's the only one we're holding under a microscope here. No matter what, she certainly didn't deserve the violent ending fate dealt her.

One of the pluses to the show has been the immediate resurgence of interest in the case. I'm told that on Sunday at one point, the Top Ten Google searches including 9 on the football draft and Christa! One of the minuses would be the rampant promoting of mistaken "facts" as if they're real as well as the surprising amount of judgemental posts about her. One poster described her as a celebrity "groupie." Nope. Can't give you that one. A traditional groupie is submissive to the celeb of her choice. Christa Helm was drawn to powerful men and knew how to utilize her charms to get what she wanted from them--publicity, money, gifts, houses, career boosts.

There's also been a lot of self-righteous taking her to task for abandoning her daughter. I'll grant you it certainly seems a terrible thing to do but I've spoken with her daughter and I'm happy to say she has turned out just fine thanks to the way she WAS raised. Had she been more involved in Christa's quest for fame and show business success, the odds would have been quite different.

Finally, I would never presume to know more than a retired LAPD detective but I have to say that the Sal Mineo connection that he so strongly espoused on the show seems very unlikely to me. In our own investigation, we came across the contemporary speculation about a connection. There was also talk of Christa's murder being connected to that of actress Barbara Colby. In actuality, none of the three cases are all that similar and Mineo's, in spite of the coincidence of the date being exactly one year earlier, appears completely unrelated to me.

Visits to the Libray here have increased by about 3000 yesterday so I'd like to welcome one and all! Hope you like what you see and come back. We're moving to the fast track with our own Christa Helm biography now so if anyone reading this knew Christa Helm or has any information at all on her life and/or career, please contact me at booksteve@aol.com or co-author John O'Dowd at Jod6cindy@aol.com.
Oh, and if you happened to miss the episode on Saturday you can catch the whole thing online (at least for awhile) at :
CBS News Video - Top Stories and Video News Clips at CBSNews.com
Posted by Booksteve at 6:34 AM