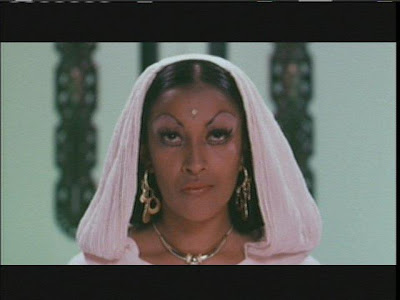 This morning, just two days shy of the day two years ago when I scanned the fading ad for LET'S GO FOR BROKE, I received a copy of the film made from the only known surviving print that I found a few months back. While it is an interesting story, I won't go into the details. I just would like to publicly thank Director Ron Walsh, CBS Producer Anthony Vendiiti and particularly the film's producer, Stuart Duncan for arranging for me to get my copy. Unfortunately for you all, I am precluded by the arrangement from sharing it with you. I will say that our original anonymous correspondent way back when was astonishingly correct in his memories of the details of the picture! If I didn't know better, I'd think he was sitting there with a copy himself! Other observations from my first viewing (and I must admit a thrill knowing that only the tiniest handful of people have seen this picture in over thirty years!):
I don't think that we previously knew that Lennie Barrin--Christa's sometime fashion designer business partner (and 48 HOURS MYSTERY's suspect for the person who had Tony Sirico "clean up" her apartment after her death.-- did the costumes.
Nice touch that characters had the names of Christa's friends like "Lennie" an 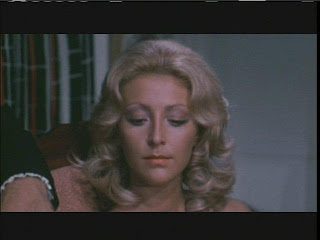 d "Nikki"
As the head villainess, Chittra Neogy (pictured above) acted rings around everyone else without even trying! She's the only one who seemed to stay in character between her lines.Everyone else seemed to be waiting for their cues.
Frank Raiter seemed to be attempting to channel Paul Lynde (who wasn't even dead yet )as the camp villainous brother!
The musical score was quite good but since an instrumental version of the 5th Dimension's "Beautiful Balloon" closed the story, I wonder how much of it may have been pre-packaged.
Christa's Jackie Broke wears about a dozen outfits, all of which fit her perfectly even after she's been kidnapped and takes no extra clothes with her. She also starts out with curly hair, soon has wavy hair, then straight hair...of varying lengths.
Christa's acting only seemed to come to life when she had a funny line. Along with her STARSKY AND HUTCH bit it makes me wonder if her future might have been in comedy character parts.
The picture seem 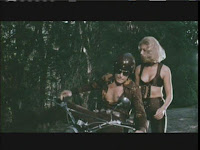 ed at least twenty minutes too long but when you consider it was pieced together from what was essentially two (serious and camp) versions they shot it was edited pretty well.
Overall, I think it would've made for a passable evening at the drive-ins back in '75. One can't help speculating that if it had, Christa probably would not have ended up where she was that night in '77. Sigh. At some point soon, I will undoubtedly do a more detailed critique. Maybe I can even convince IMDB to list it now. Just last month they finally corrected her name and within the past 24 hours, they've also fixed her birth name and date of death! Now about that alleged porn feature...?

Posted by Booksteve at 6:12 PM