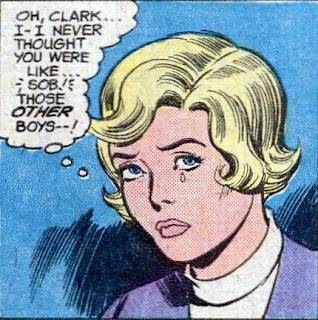 Okay, now we all know Clark Kent so I don't know how much stock to put in the words of this innocent young thing who accuses him of...well...let's not even go there! Perhaps she's just trying to cash in on his later fame as a reporter or an anchorman. You know how the media blows everything out of proportion. Had to be just some kind of misunderstanding...didn't it? I mean...Clark really ISN'T like the other boys, y'know?
Posted by Booksteve at 10:45 AM