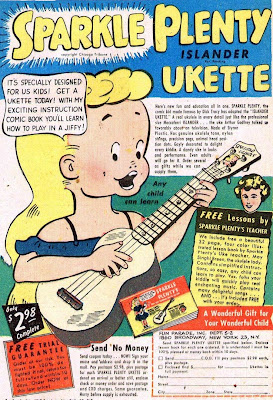 In the mid-1940's Gravel Gertie and B.O.Plenty, two bizarre supporting characters in DICK TRACY, got married and had a baby. Considering the general unattractiveness of her parents (reformed criminals), the only logical thing for the strip's creator, Chester Gould, to do was to make their offspring the worlds's cutest baby! That was SPARKLE PLENTY, the hillbilly baby with a mane of long golden hair. In the strip, she became a phenomenon but in real life she did, also! Here's just one product "Sparkle" herself endorsed--a miniature ukelele. Remaining in the background of the strip for the next few decades, she eventually wed Junior Tracy after his first wife, Moon Maid (a remnant of the stripo's long flirtation with science-fiction in the sixties) was killed off.
Posted by Booksteve at 11:09 PM