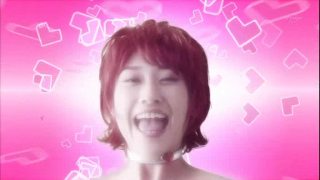 One of my favorite guilty pleasures of late has been the Japanese TV series, CUTIE HONEY-THE LIVE, now reaching its end. The character of the android superheroine, Cutie Honey, has been around since the seventies, usually in

animated form, but I was most familiar with it through "Joshua Quagmire's" eighties comic book parody character, Cutey Bunny (See:the QUAGMIRE ). As with many Japanese programs,

it offers surreal delights to audiences. In this case, the basic story consists of Honey, as a uniformed high school student, fighting an evil organization in her off hours. Beyond that, though, we have not so under undertones of lesbianism, a considerable amount of PG13 T&A, a soap opera backstory, unusual villains like the old fish lady, an eggsucking villainess an

d a transvestite who looks like Jim Morrison but WANTS to be Honey and, before long, the introduction of not one but TWO other superheroines. In contrast to Honey's pinkness, the two newcomers wear blue and white. The blue girl is a dark, surly figure while the white girl is all cheery and light at first but then comes to covet Honey's android body for spare parts! It's funny, visually cool and has some kick-ass action. There's a great musical score (as is usually the case with Japanese TV) and a serialized plot that keeps you wondering what the hell they're going to pull out of their kinky bag next!
Posted by Booksteve at 11:17 AM