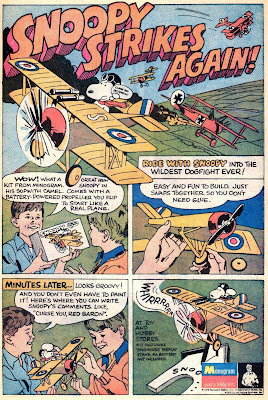 Speaking of dogs--Here's a cool model ad from the late sixties, done up as a comic strip that has an almost underground feel to me for some reason. Snoopy's surreally imaginary battles with the Red Baron had become a cult favorite subsection from PEANUTS and here (along with the spin-off book and the pop songs we wrote about last year)was one result. By giving him a real Sopwith Camel, however--as opposed to his own doghouse--the model inadvertantly frays the fantasy that had become so beloved by young and old. Note that an attempt at keeping the pop art feel was made by having a word balloon that you fill in yourself. The best touch though, in my mind, was the base to display the plane. Finally! There was the doghouse! That got them--pardon the expression--out of the doghouse with me!
Posted by Booksteve at 8:43 PM