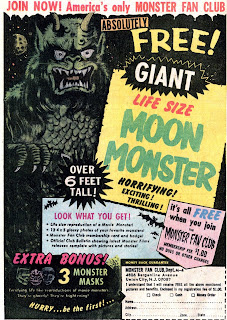 Not sure if these folks were trying to scare kids or what but it was the early 1970's, man had just landed on the moon in mankind's proudest triumph and here this ad comes along telling kids there were monsters there! My friend Terry actually joined this "club" but all they actually sent him was the Monster--a large black and white wall poster. Sigh. Can't trust anyone!
Posted by Booksteve at 8:45 AM