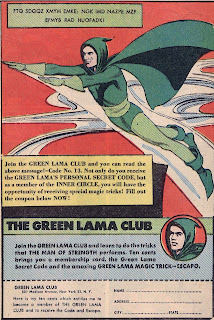 Here's a 1942 ad for the GREEN LAMA CLUB, yet another tool to see just how many kids were buying that character's comic. Based on a radio hero who was, in fact, a rip-off of THE SHADOW, THE GREEN LAMA comic was known for having more adult art and stories than most comic books

of the day (often by the great Mac Raboy) but nonetheless did not stand the test of time. The good news about that, though, is that it made the character ripe for Alex Ross's current WATCHMEN-style revival of the now public domain second and third strings heroes of the Golden Age, PROJECT SUPERPOWERS. Strongly Recommended!
Posted by Booksteve at 8:06 AM