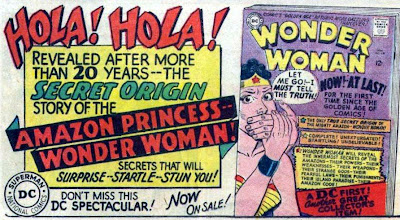 Although oft-mentioned on this site, the big nostalgia boom of the 1960’s had not really hit in late 1965 when this issue of WONDER WOMAN with it's excessively wordy cover hit the stands. The camp craze that came with Batmania was still a couple of months away, also. Thus it now seems more than a bit confusing that Editor/Writer Robert Kanigher would opt for a return to WW’s Golden-Age roots with this issue. Longtime artists Andru and Esposito even began aping the more primitive art style of the feature’s original artist, Harry Peter. Essentially re-telling the original tales in a slightly more modern (meaning in this case less kinky) fashion, the attempted trend petered out after a few months and the character went high camp for awhile with the rest of her DC contemporaries.
Posted by Booksteve at 11:58 PM