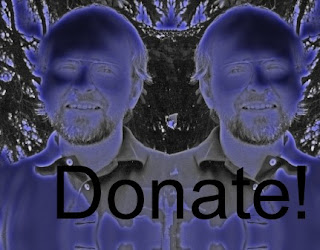 I know, I know. I hate to do this and you hate it when I do this. Believe me, I'd much rather be writing about THE VICAR OF DIBLEY, Dez Skinn's WARRIOR, THE BIG BANG THEORY, THE STAR WARS HOLIDAY SPECIAL, Bogart postage stamps, Apollo 11, the upcoming IRON MAN movie, SSgt Barry Sadler, Gene Autry, new developments in the Christa Helm story, the new book PICTURES AT A REVOLUTION, Jack Benny's feud with Fred Allen or NEON GENESIS EVANGELION. Or maybe thanking the inimitable Michael Netzer for saying very nice things about my wife and myself here:Michael Netzer Online - Thou Shalt Not Make Thyselves Any Toy Messiahs (and giving a long overdue plug to his campaign to save the Martian Manhunter!). Still reality sets in and with it depression from losing yet another bill to a collection agency. With my next check they're taking out more for medical insurance. Tried to sell some more comics but the market's down. Same with coins. To top it all off, we're sitting on a hundred thousand dollar house that my wife ended up with last year when her mother passed away but THAT market's down, too so for now that's just costing us also! Last month, we lost our Internet connection for more than a week. I don't want that to happen again so I come to you readers again asking for even a small tip in the PayPal tipbox. It all helps. Thanks.
Posted by Booksteve at 6:16 PM