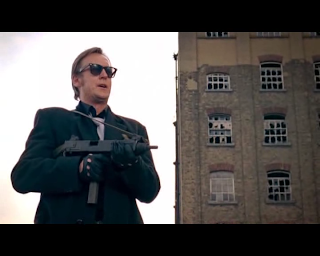 I just now found out that the follow-up series to my favorite TV show of the past couple of years, LIFE ON MARS, has been airing across the pond for more than a month! ASHES TO ASHES—like its predecessor named after a David Bowie song—tells the story of Alex Drake (Keeley Hawes),a police hostage negotiator in modern day who is investigating Sam Tyler and his supposed delusions of having been in 1973. When she herself gets shot, she finds herself dealing with some of the same folks she read about in Sam’s files albeit this time in London, 1981!
As with LIFE ON MARS, the real grit of this show comes from Philip Glenister and his performance as Gene Hunt, rapidly becoming a cult figure I understand! It’s eight years later and Gene is reluctantly moving into more modern methods of polic 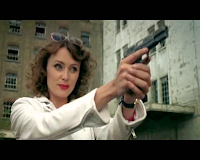 e work (including an early computer! "It’s got Pong on it," he says). At heart, though, he’s still the hard-drinking, unrepentently sexist brawler he’s always been. When he transferred, he brought along compatriots Ray and Chris ( Dean Andrews and Marshall Lancaster) from the other show and the chemistry between the three is still there! Our heroine is convinced from the get-go that it’s all in her mind and can’t figure out why it all seems so real! Gene is convinced she's nuts.
There are huge plot holes (like how come the folks in 2008 couldn’t see Sam’s record of his police work in 1973 if he really had been there?) but with stylish camerawork, excellent performances, familiar eighties songs and a confusing but intriguing mystery that parallels the original series, ASHES TO ASHES sucks you right in!

For more information on ASHES TO ASHES, here's a link to the BBC's official site: BBC - Drama - Ashes to Ashes
Posted by Booksteve at 9:15 AM